RFL Records and SamBones Promos present the newest record from long-time melodic rockers Playhouse and it is a gem! Darker and more “Americana” than some of their previous work, the aptly titled Dancing at Funerals is a fun, celebratory romp set against the backdrop of the dying American Dream, outfitted with what should always come first in music-creation; songwriting.

Opening track, “Requiem” sets the stage with melancholy piano that sinks you right into the beer you’re drinking before offering a few glimmers of hope and light with it’s final chords. Leading us right into the melodic and soulful title-track, “Dancing At Funerals”, it’s clear that Playhouse doesn’t stick to one genre or style. The melodies echo The Eagles, while the aggression and attack is far more G’nR.  And the pairing fits, in spades! 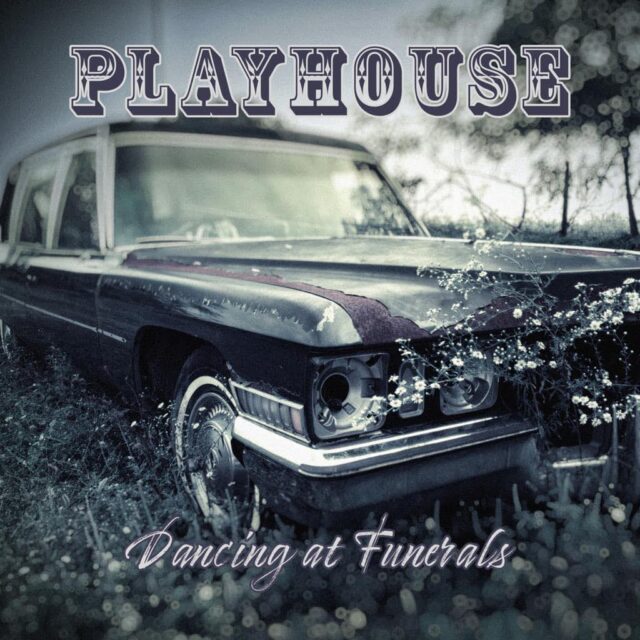 “Hell’s a Long Way Down” is an obvious standout with a tour-style video footage showing the band what they do best, PLAYING LIVE! The riffs are killer and catchy, and the hook is dynamic and strangely uplifting in a dark and sentimental way. This track shows that Playhouse are aware that they are no longer eighteen year old party animals, but that they are grown, have lived in their lives and in their skin, and have a lot to say about the world they’ve inhabited in their thirty-five years as a band (they just celebrated their 35th anniversary!). The showmanship is fierce in this video, but the musicianship not only backs it up, but marries it perfectly.

While a personal favorite is hard to pick, upon my second listening, “Too Old to Die Young” is at least a contender. Arguably the best refrain on a record already rich with great refrains, this one stays stuck in your head. It’s the howl of man who knows where he is on the mortality line and is strangely at peace with it. What’s been seen has been seen. What’s been done has been done. No regrets, and ultimately no looking back. “The Storm” with it’s melodic sensibilities, it’s absolutely killer opening riff, and it’s undeniable blend of nostalgia and new ideas is right up there with it. Click the title for a really incredible animated video for that cut!

In my interview with principle songwriter, Peter Cat, I was informed that closing number, “Champaigne” almost didn’t make the cut. Boy am I glad it did! It’s easily the bravest song here.  Complete with romantic pop-song-writing lyrics, an actual hip hop breakdown (and yes, Peter can spit), and a general genre-fluid-flow, it opens up Playhouse to so many possibilities going forward. The song is fun, it’s got the vibe of friends hanging out and making music, consequences-be-damned, and it comes across as one of the most relaxed and effortless cuts on the record.

All in all, this is an album-person’s album. It needs to be listened to from beginning to end, preferably in one sitting. Yes, I’ve ended reviews with those words before.  That’s likely because that’s the kind of record I like to review! Kudos to Playhouse for an engaging listen which warrants multiple spins to get the truest glimpse of it’s richness. Dark Americana is a word I keep throwing around, but that doesn’t mean this album is hopeless. In fact, the title fits so well. This is the dance you do when you refuse to do anything but celebrate, even if your life and the world falls apart around you. And the music you dance to, is this album. Dancing at Funerals has produced three music videos and rave reviews already. It’s no secret. This could be Playhouse‘s masterwork. Follow them on their socials and check out the work! You won’t be sorry.