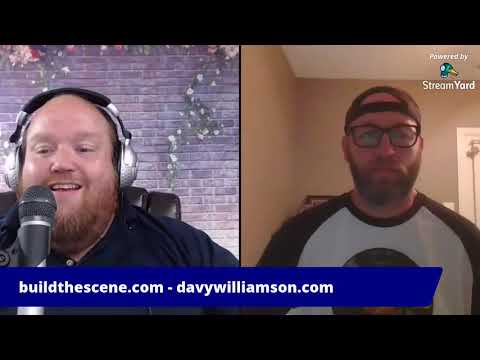 Davy Williamson comes to us from our friends at MTS Management Group. Davy takes on his version of 3 Questions and a Song on episode 58!

Can you tell us about the moment you wanted to be a musician? and as a secondary question to your musical history, having been in successful regional bands like, Third Class Passenger and Ma-Shot-Pa, to name a few; what made you decide to go out as a solo artist?
You have to choose a backing band for your next project, but it has to be a band from the glam rock age.. who is backing you?
What genre of rock do you consider yourself? asked by Judy Rodman on episode 57.
About Davy Williamson
Genre: Rock
Band Location: Wilmington, NC, USA

American singer, songwriter, producer and multi-instrumentalist. Prior to going solo, Davy was the lead singer and guitarist of multiple North Carolina rock bands including, Third Class Passenger and Ma-Shot-Pa.

Born in Plant City, Florida and raised in his hometown, a small East Coast Port City… Wilmington, North Carolina’s Davy Williamson has enjoyed his share of success dating back nearly 25 years to his stints in popular regional bands like Third Class Passenger and Ma-Shot-Pa. In 2020, Williamson took his music to a whole new level with his debut solo single, “Thin Disguise.” The track reached international hit song status, by reaching #1 on the iTunes Rock Songs chart in South Africa.

In early 2021, he was featured in Alternative Press online, as well as having received rave reviews for the single.

On March 12th, 2021, Davy Williamson released “Down By The Fire,” a collection of 8 songs written and performed by Davy, including the previously mentioned “Thin Disguise” and new single, “Cliche.” The EP was co-produced by Williamson and Shawn Adkins of Back-A-Round Records. Adkins and Steve Hardy handled mixing duties. Mastering was done by Andy Vandette. Pre-sale for “Down By The Fire EP” begins on February 27th.